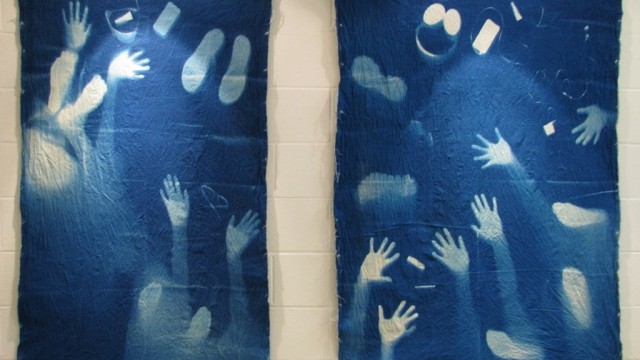 My practice is centred in two interacting domains: questions of community and the exchanges by which community is structured, and our bodily experience of architectural and social space. My built objects are often domestically useful, made from hardware store kit plans, and enter the world through ‘for sale’ posters, classified ads, raffles, and other straightforward means. My built installations are depictions of sensory experience that require our bodily participation.

Continuing to use the early photographic method of cyanotypes, I will make portraits of bodies for the Luminous Bodies Thematic Residency. I am interested in cyanotypes as a means to contest supposed photographic objectivity. Having increased the scale of the cyanotypes that I produced over the past two summers, I have also begun to dye the canvas to produce novel and unusual colour combinations, further disrupting the perception of photographic events. While I would like to produce works on a much larger scale, I am also interested in researching the use of natural fabric dyes for my process.

Looking at the history of cinema, I have come to appreciate the films of Friedrich Wilhelm Murnau, a pioneer of early German films, including The Haunted Castle and Nosferatu, as well as Lotte Reiniger’s feature length stop-action animation, The Adventures of Prince Achmed. Both directors make astonishing use of light, shadow, and saturated colour. Using canvas surfaces area roughly 2 metres by 4 metres, I would be able to draw on the cinematic not only in its portrayal of bodies, but also movement and time.

I would also like to engage people present at the Toronto Islands by taking photos using an Afghan box camera, or kamra-e-faoree. The relatively simple apparatus allows negative images of subjects to be taken on the spot, then re-photographed, producing a positive image roughly the size of a passport photo. While the resulting photo provides a fairly accurate record of a person’s likeness, the ramshackle apparatus, and manner by which it produces images once again problematises photographic objectivity, particularly in terms of identity.

Alisdair MacRae, an artist working in sculpture and installation, was born in 1974 in Dawson Creek, BC and raised in Victoria. In 2002, he received an MFA from the Milton Avery Graduate School at Bard College, New York, complementing his 1998 BFA from the University of Victoria. In 2012, he completed a thesis on Joane Cardinal-Schubert for the graduate program in Art History at Carleton University.