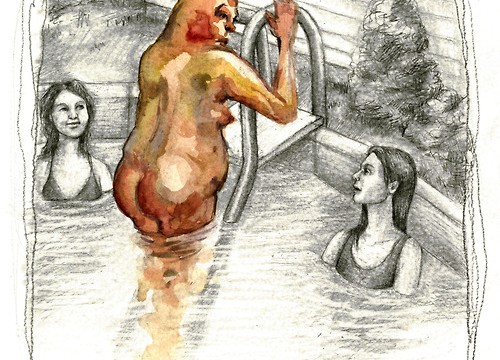 The majority of my artwork stems from an exploration of my body and self-image in relation to others. I have always been drawn to themes of self-portraiture, and over the years, I have realized that the pieces I create often inherently speak about gender, sexuality and body image. I have suffered from disordered eating (anorexia and bulimia) as well as several physical ailments—including having to undergo a spinal fusion after fracturing one of my vertebra—that have resulted in an artistic fascination in the representation of the body, especially my own.

I have recently been creating paintings and drawings revolving around a character I have created named ‘Eek.’ Eek is portrayed living the awkward, embarrassing or immoral experiences in life. Although Eek’s physical appearance is exaggerated and somewhat gruesomely sexual, through it’s undeniable bodily quality it is able to breed a sense of familiarity with the viewer through sympathy or even empathy and she becomes more ‘real’ when her story is explored. Despite the questionable activities she participates in—such as walking down the street both smoking and farting, or being the childhood bully on the playground—she is relatable. Eek represents the admittance of these moments and the acceptance of them as part of the human condition. The narrative of Eek is never ending, because not only do I have my own collection of embarrassments and misery, but everyone else does too, and she is a vehicle of admittance for all.

In the Luminous Bodies Residency, I will explore the interrelation between the contexts of my own body, Eek’s, and others. I will translate this concept into paintings and drawings, whether it would include continuing Eek’s storyline or moving onto other paths of inspiration.

Emma Eichner is currently a senior at Carnegie Mellon University to graduate in May with a Bachelor’s of Fine Arts in painting, drawing and printmaking.